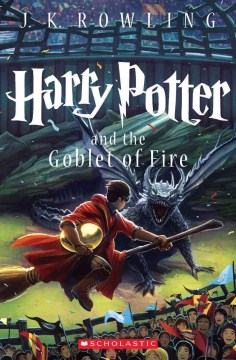 Harry Potter and the Goblet of Fire

An extraordinary creative achievement by two extraordinary talents, Jim Kay's inspired reimagining of J.K. Rowling's classic series has captured a devoted following worldwide. This stunning new fully illustrated edition of Harry Potter and the Goblet of Fire brings more breathtaking scenes and unforgettable characters to life - including Cedric Diggory, Fleur Delacour and Mad-Eye Moody. With paint, pencil and pixels, Kay conjures the wizarding world as we have never seen it before. Fizzing with magic and brimming with humour, this full-colour edition will captivate fans and new readers alike as Harry, now in his fourth year at Hogwarts School of Witchcraft and Wizardry, finds himself competing in the legendary Triwizard Tournament and facing death-defying tasks, dragons and Dark wizards ...

A young wizard who has many cool and action-filled adventures:Harry Potter.

The Goblet of Fire is a great book and movie, but still not my favourite!

This book is great ! The best harry potter book I would say !

Somebody has placed Harry Potter's name in the Goblet of Fire. As an underage wizard to play in the Triwizard Tournament, he is chosen as a champion and must participate in it. These stages may mean death and somebody wants Potter dead - and that person is within Hogwarts. This mystery and light romance book is the start of Voldemort's return. Find out more by digging yourself into the entire Harry Potter series!

Harry Potter starts his fourth year at Hogwarts with a shocking turn of events - Hogwarts is hosting the Triwizard tournament, where three witches and/or wizards compete in an epic battle to claim the Triwizard cup. When Harry unexpectedly becomes the fourth champion of this competition, he is shocked. Who put Harry's name in the Goblet of Fire, the cup in which Dumbledore (the headmaster) draws the names of the contestants who compete from the three schools (Hogwarts, Beauxbatons, Durmstrang) ? And why does his scar throb so painfully? Mysteries await in this fourth installment to the Harry Potter series, mysteries that end in something unspeakable.

4th masterpiece in the Harry Potter series, written by J.K.Rowling. It features Harry in his 4th year at Hogwarts and his unexpected entry in to the Triwizard Tournament, which ultimately causes the rise(resurrection) of evil(the Dark Lord)

Harry Potter as he wakes in the night with a throbbing pain in his scar. The next morning, Harry's Uncle Vernon receives a letter from the Weasleys asking Harry to join them at the Quidditch World Cup, and reluctantly agrees to let Harry go. Harry is brought to The Burrow the next day. Early the next morning, the Weasleys, Harry and Hermione head off to the Quidditch World Cup. They travel by Portkey, an object which wizards use to travel quickly to another linked destination. While traveling, they meet Cedric Diggory, another Hogwarts student. At their seat, Harry, Ron, and Hermione meet Winky, a house-elf who says she is saving a seat for her master, Bartemius 'Barty' Crouch. That night, after the game, a crowd of Death Eaters (followers of Voldemort) destroy the campground and torture its Muggle owners. Harry, Hermione and Ron escape by fleeing into the woods, where Harry discovers that his wand is missing. Moments later, someone fires Voldemort's symbol, the Dark Mark, using Harry's wand. Winky is found holding Harry's wand at the scene of the crime; Mr Crouch fires her as punishment for associating his name with the Dark Mark. Later at the Burrow, Cedric's father brings news that a man named Mad-Eye Moody attacked an intruder at his house, forcing Arthur to sort it out.
Upon arriving at Hogwarts, Professor Dumbledore announces that the Triwizard Tournament will take place at Hogwarts throughout the school year. The Tournament is a competition between three delegates, or "champions", one from each of the three great European schools of magic - Hogwarts, Beauxbatons, and Durmstrang. These champions compete in three tasks and they are given scores by the judges based on their performance

watch harry potter when he gets in onoter adventure or a contest and tries towin the cub but something bad happens.

The most fun to read Harry Potter book!