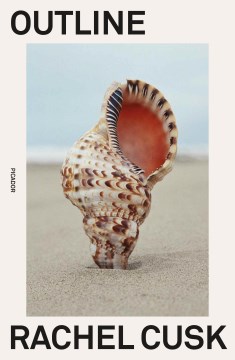 "Rachel Cusk's Outline is a novel in ten conversations. Spare and stark, it follows a novelist teaching a course in creative writing during an oppressively hot summer in Athens. She leads her students in storytelling exercises. She meets other visiting writers for dinners and discourse. She goes swimming with an elderly Greek bachelor. The people she encounters speak, volubly, about themselves: their fantasies, anxieties, pet theories, regrets, and longings. And through these disclosures, a portrait of the narrator is drawn by contrast, a portrait of a woman learning to face a great loss. Outline is Cusk's finest work yet, and one of the most startling, brilliant, original novels of recent years."-- Provided by publisher
Publisher: New York : Farrar, Straus and Giroux, 2015
ISBN: 9780374712365
Branch Call Number: EBOOK OVERDRIVE
Characteristics: 1 online resource text file
Additional Contributors: OverDrive, Inc. - Distributor

I didn't know what to make of this book as I read, yet it held my interest. The narrator relates a handful of events she experiences on a work trip to Athens alongside the personal stories of people she meets there. The possible intent of this structure was only apparent to me in the final chapter: a secondary character describes a moment when she better understands herself during a conversation with a stranger in which she sees an outline of herself emerge in perfect contrast to his description of himself.

I don't remember how I was made aware of this book but I must have been impressed by the hype because I put the book on hold and put the remaining two members of the trilogy in my 'for later' stash.

I shouldn't have fallen for the hype because that's what it is, just hype. I don't know why anyone would have spent time writing the book and can't figure out why an editor would have given it the go ahead to be published.

Rather than being a book characterized as, "restrained, incisive narrative of high stylistic polish, and stealthy emotional power", *Outline* comes across as amateurish in both plotting and prose. The characters, drawn by descriptions that sound as if they come from a potboiler cliche catalog, are dull and lifeless, one dimensional on a two dimensional page. The prose falls flat as well.

The substance of the book, such as it is, is a series of conversations about failed relationships, with spouses and family, something you would try to drown out if overheard in a restaurant.

I almost quit reading after less than ten pages but plowed forward to the halfway point, hoping all the time it would get better, that the magic would be unleashed. It didn't and it wasn't.

Perhaps because I had been reading Kafka, John Berger, essays on Thomas Pynchon, and had just consumed *Pond* by Claire-Louise Bennett the day before I tried reading *Outline* I had been spoiled by well-crafted prose, interesting characterization (when necessary), mystery, and true magic.

I would not recommend *Outline* to anyone. If you're looking for a truly great book, turn to something such as *The Essex Serpent* by Sarah Perry, John Berger's *Pig Earth*, *Le Grand Meaulnes* by Alain-Fournier, or the complete works of Kafka instead.

This is book is quite introspective and observational and I found it to be a fascinating read. It seems to capture people's thoughts and meditations about their lives but captured in a conversation. While reading this, I thought about how many of us often are caught up in our thoughts of what we could have been and done and what paths we have taken in our lives. The writer is quite gifted in her ability to capture characters drifting through life caught up in their thoughts. It's not a novel for everyone though, but if you're looking for something cerebral and introspective, give this a try.

Rachel Cusk is a capable writer, but I found little pleasure in reading this book. Sometimes, while plodding through somebody's story, you say Alright, enough now, but there are a few more pages to go. Maybe the best chapter is the one devoted to animals, who are unpredictable and destructive, at least the dog who eats the birthday cake... For a rainy day when you have nothing else to do.

Lots and lots of people sitting around eating and telling stories about their personal lives that are hard to tell apart. It's like My Dinner with Andre but without the metaphysics

While I liked the overall concept of the book, I found it very flat and uninteresting.

As we follow the narrator from a jet into Athens, Greece, we are introduced to an eclectic collection of characters through chance encounters, gatherings, and a writing class. If you are interested in learning about the various stories of fascinating people from all walks of life, this is the book for you.

"What Ryan had learned from this is that your failures keep returning to you, while your successes are something you always have to convince yourself of." Smart and insightful novel by Canadian Rachel Cusk. Part of a trilogy with "Transit" and "Kudos."

A monologue about a woman's voyage to Athens, that emphasizes the disturbing distance between the inside and outside. Marvelous movement between sharp observations of passing events and existential philosophy, but lacks plot.