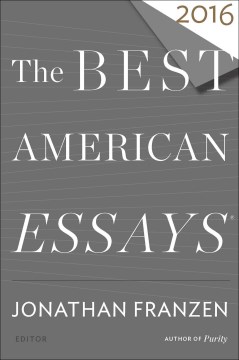 Houghton
A true essay is &;something hazarded, not definitive, not authoritative; something ventured on the basis of the author&;s personal experience and subjectivity,&; writes guest editor Jonathan Franzen in his introduction. However, his main criterion for selecting The Best American Essays 2016 was, in a word, risk. Whether the risks involved championing an unpopular opinion, the possibility of ruining a professional career, or irrevocably offending family, for Franzen, &;the writer has to be like the firefighter, whose job, while everyone else is fleeing the flames, is to run straight into them.&;

The Best American Essays 2016 includes ALEXANDER CHEE, PAUL CRENSHAW, JAQUIRA D&#205;AZ, LAURA KIPNIS, AMITAVA KUMAR, SEBASTIAN JUNGER,
JOYCE CAROL OATES, OLIVER SACKS, THOMAS CHATTERTON WILLIAMS and others
&#160;
JONATHAN FRANZEN, guest editor, is the author of five novels, most recently Purity, and five works of nonfiction and translation, including Farther Away and The Kraus Project. He is a member of the American Academy of Arts and Letters, the German Akademie der K&#252;nste, and the French Ordre des Arts et des Lettres.
&#160;
ROBERT ATWAN, the series editor of The Best American Essays since its inception in 1986, has published on a wide variety of subjects, from American advertising and early photography to ancient divination and Shakespeare. His criticism, essays, humor, poetry, and fiction have appeared in numerous periodicals nationwide.
The award-winning and best-selling Jonathan Franzen picks the best essays from hundreds of magazines, journals, and websites.

Baker & Taylor
An award-winning, best-selling author of Purity selects the best essays as published in magazines, journals and on websites to be included in this annual anthology.