Saved Searches Advanced Search
While our buildings are closed, we’re still here for you with online resources, virtual events, and appointments for no contact pickup service.
Please hold on to library materials. Due dates for checked out items will continue to be extended. Read more
Print 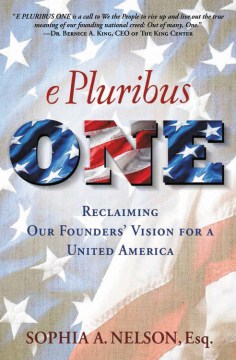 Rediscovering Our Founders' Vision For A United America

OUR FOUNDERS understood that America was the greatest experiment on earth. And they sealed it with these words: E pluribus Unum: "Out of Many We Are One."

"America is the story of us. And us isn't doing so great right now." Says award winning journalist and author Sophia A. Nelson. Coming on the heels of the raucous and divisive 2016 general election campaign, Nelson attempts to give the nation an inspirational charge and lift by helping us to reclaim our founders' vision for a united and strong America. Nelson reminds us that "we the people" are charged by our founders' to cherish life, liberty, freedom and equality, as well as to safeguard the nation from intrusive governance. The founders' also charged our leaders to be moral, virtuous, patriotic servants of the people.

In this groundbreaking book, Nelson challenges us to live out the call of our founding:

We are ONE America.

We are ONE People.

We are ONE nation indivisible with liberty and justice for all.

Pulling from our founding fathers' core principles of liberty, citizenship, morals, virtues, civic engagement, equality, self-governance, and, when required, civil disobedience, Nelson calls us to a higher standard. She calls us to purpose. And she calls us to rediscover the things that unite us, not divide us.

One is a book that all Americans, regardless of political party, race, religion, or gender can embrace and share with their children and grandchildren for generations. It is a reminder simply of what makes America great and what makes us the envy of the world. Alexis de Tocqueville said it best: "America is great because America is good. If America ever ceases to be good, it will cease to be great." Nelson takes us on a historical, yet very inspirational journey of not just our founding values, but the men and women who walked them out and brought America to be the great light it is in the world over the past 240 years.

Baker & Taylor
An award-winning national opinion writer presents a modern-day manifesto of citizenship and leadership that takes readers on a historical journey through the principles, codes and virtues upon which we were founded and offers a way forward as the nation prepares to inaugurate a new President and a new national agenda for America.