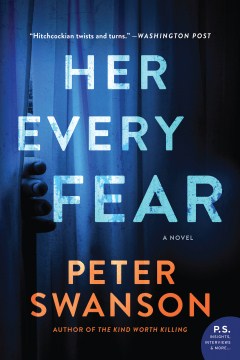 Baker & Taylor
A woman prone to panic attacks in the aftermath of a violent kidnapping relocates to a cousin's home in Boston, where a neighbor's murder embroils her in speculation about her cousin's nature and the intentions of an appealing stranger.

The author of the wildly popular The Kind Worth Killing returns with an electrifying and downright Hitchcockian psychological thriller&;as tantalizing as the cinema classics Rear Window and Wait Until Dark&;involving a young woman caught in a vise of voyeurism, betrayal, manipulation, and murder.

Growing up, Kate Priddy was always a bit neurotic, experiencing momentary bouts of anxiety that exploded into full blown panic attacks after an ex-boyfriend kidnapped her and nearly ended her life. When Corbin Dell, a distant cousin in Boston, suggests the two temporarily swap apartments, Kate, an art student in London, agrees, hoping that time away in a new place will help her overcome the recent wreckage of her life.

But soon after her arrival at Corbin&;s grand apartment on Beacon Hill, Kate makes a shocking discovery: his next-door neighbor, a young woman named Audrey Marshall, has been murdered. When the police question her about Corbin, a shaken Kate has few answers, and many questions of her own&;curiosity that intensifies when she meets Alan Cherney, a handsome, quiet tenant who lives across the courtyard, in the apartment facing Audrey&;s. Alan saw Corbin surreptitiously come and go from Audrey&;s place, yet he&;s denied knowing her. Then, Kate runs into a tearful man claiming to be the dead woman&;s old boyfriend, who insists Corbin did the deed the night that he left for London.

When she reaches out to her cousin, he proclaims his innocence and calms her nerves . . . until she comes across disturbing objects hidden in the apartment&;and accidently learns that Corbin is not where he says he is. Could Corbin be a killer? And what about Alan? Kate finds herself drawn to this appealing man who seems so sincere, yet she isn&;t sure. Jetlagged and emotionally unstable, her imagination full of dark images caused by the terror of her past, Kate can barely trust herself . . . So how could she take the chance on a stranger she&;s just met?

Yet the danger Kate imagines isn&;t nearly as twisted and deadly as what&;s about to happen. When her every fear becomes very real.

And much, much closer than she thinks.

Told from multiple points of view, Her Every Fear is a scintillating, edgy novel rich with Peter Swanson&;s chilling insight into the darkest corners of the human psyche and virtuosic skill for plotting that has propelled him to the highest ranks of suspense, in the tradition of such greats as Gillian Flynn, Paula Hawkins, Patricia Highsmith, and James M. Cain.

Very disappointing thriller. Mr. Swanson does not seem to understand traumatized women. Perhaps that should read traumatized people and women. First we have a protagonist who has suffered from anxiety disorder virtually all her life and then survives a very real trauma at the hands of a man who supposedly loved her. Consistent with this history, she has lived a sheltered life with her family. Then for her first venture into the unsafe real world she decides to move to Boston from England. Shouldn't there be a few intermediate steps??? Add to this a cousin who is a really nice guy who also just happens to be a murderer. A young woman is murdered in her building in Boston, but this does not seem to disturb her. There is some dumb explanation that she feels less anxiety under stress. As I said this author does not understand PTSD or anxiety disorder. She blithely sleeps with someone she barely knows ( who is a voyeure and possibly a killer ), ventures into the basement searching for evidence of a murderer with impugnity, and finds signs of someone having enterer her home without batting an eye. How about calling the police???? Terrible book. Kristi & Abby Tabby

Not as good as his The Kind Worth Killing, but still a very enjoyable and superior thriller. Kate is a withdrawn and fearful (with good reason) young Englishwoman who apartment-swaps her London flat with her cousin's palatial highbrow Beacon Hill address in Boston. On the evening she moves in, her neighbor's corpse is found in the apartment next door. What a welcome-to-the-neighborhood. Kate wonders if cuz has anything to do with it. So does everyone else.

Swanson is a master of the matter-of-fact shocker. This satisfied all of my can't-put-it-down, wait-are-all-of-the-doors-locked? cravings.

Enjoyable although a bit wordy & reading through all Kate's fears was tiring. Some parts required considerable suspension of disbelief, as in strange things happening in her apartment. In the tradition of Patricia Highsmith & Alfred Hitchock.

I read Her Every Fear in January, but I have not been able to write a review until now. Though this time it was not because I cannot pin down a rating, but rather what do I exactly want to say. I requested this book from NetGalley as I heard so many great things about The Kind Worth Killing. I figured I would grab Peter Swanson's newest novel as it too was a standalone. I was intrigued from the beginning. At first, I assumed that I would not like this book based on the main character, Kate. She's bit of a needy character and sometimes I lose patience with that, especially when it comes to suspense/mystery genres. Then something happened - I was transported into a Patricia Highsmith novel. For those of you that have not (yet!) read Highsmith it is indeed a treat for those that like a good psychological thriller. Movies such as Strangers on a Train and The Talented Mr. Ripley are a few that were adapted from her books. Highsmith has this way of making you slightly uncomfortable about the characters so that you are almost neutral about them. They are in situations that dangerous and it can turn a person. That is how I felt while I read this book. I didn't try to guess what was coming because I was enjoy the present. This is a well written book that I had a few tiny issues with (some plot that can be spoilers) but overall really enjoyed. I hope you do to!

***I received an eARC from EDELWEISS***

Kate has agreed to a home exchange with her previously unknown cousin Corbin. London for Boston...seems like a good idea to Kate…6 months in a new space to create a fresh start. A traumatic event in her recent past has made starting over sound like a very, very good idea. But is living in Boston going to be the healing experience she is hoping for? All signs point to no...

The day Kate arrives, the body of Audrey Marshal is discovered. Audrey lived in the apartment right beside Kate’s cousin, and the police soon come knocking to see what Kate might know. Was it murder? Suicide? An accidental death? As Kate becomes more and more involved in the investigation, she becomes more and more paranoid. Who can she trust? Neighbour Alan? Cousin Corbin? Audrey’s friend Jack? After what happened in her past, can Kate afford to trust her instincts? Or maybe she is right to be worried...

Pros: Love the alternate perspectives of Kate/Corbin/Allen...great pacing with an intricate plot.

Cons: Kate and her internal battles could be a little annoying...

Very good! I love that a thriller can still surprise you!

A great book! So many layers of bizarre events and characters.

What I liked about the book was the mood and the way it’s written. The element of mystery is excellent. You’re even doubting Kate and questioning her sanity because of certain events in the book. When you realize it’s all real the creep factor greatly increases.

The characters in this book are well done. You do feel for Corbin but at the same time, he brought it upon himself. (Doesn’t anyone just TALK about it anymore? It’s all about just lashing out and getting revenge???!!) And Henry, he’s just a special character all in his own group. I’ve read some pretty hateful characters...but Henry’s pretty high up on the list. He’s got some pretty serious issues and he’s overall a pretty unlikable character. But, to his credit he’s devious. Devious to the point where he could be a runner for villain of the year. His planning and methods were crafty and calculating. Imagining having someone like Henry in your vicinity is enough to get the hairs on your arms rise.

The plot was well done and flowing nicely. There is also a good amount of backstory throughout the novel so it helps you understand the actions and behavior of the characters, and that’s what I really enjoyed the most of this book. The climax of the novel was also very well done and everything comes to a perfect closing towards the end.

Twisty, creepy, stalkery. Perfect thriller! Love his writing style. Get comfortable....on the edge of your seat!!!!
My first read of 2018 so everything else has a huge bar to compare to. Lock your doors, look over your shoulder and when you think you know...you probably don’t! Cheers!

In the tradition of an Alfred Hitchcock story of suspense/thriller. Katy and Corbin switch homes in the middle of murder mystery that plays on every fear Katy ever had. Both have a dark past

I couldn't put this down...read it in just over 4 hours.