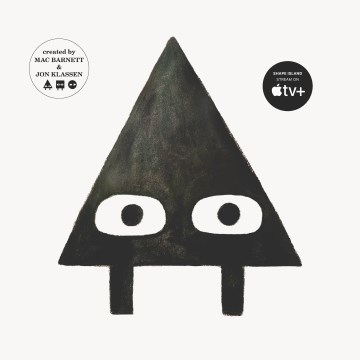 After Triangle plays a trick on Square, Square plans to reciprocate but runs into trouble when he tries to enter the triangular doorway of Triangle's home
Publisher: Somerville, Massachusetts : Candlewick Press, 2017
Edition: First edition
ISBN: 9780763696030
076369603X

I am surprised anyone does like this book. "Pranks" on phobic people are not amusing in the real world. I don't appreciate them in stories either, and this isn't one I care to share with children. Maybe it's just fitting with our current vindictive administration and era of general nastiness. . . .

Saw that it was nominated for Goodreads best book of 2017 so I thought I would give it a try. There wasn’t really a plot to this book, but then again it’s a children's book. Had beautiful artwork. Rating 3 out of 5 stars.
- @Fallenangelhushhush of the Teen Review Board of the Hamilton Public Library

More wonderful illustrations from Jon Klassen! This is the story of Triangle, who decided to play a trick on Square. He travels across lands with different shapes to where all the rocks are square. After his trick square chases him back home. When Square gets stuck in Triangle's door, we find out Triangle is scared of the dark, and Square is blocking all the light! Square says he is now playing a trick on Triangle. Readers are asked if they believe he meant to get stuck or if it was an accident.

I love the simplicity of the story and the illustrations. I also love how the children are presented with an entire story, but still have a question at the end. this would be great to share with an individual child and talk about what they think, or with a small group and ask for hands up or down. It could also be a writing prompt for older kids on tricks they can play, what they would do if they were one of the characters, or if they were a new character in the story.

A full review of this picture book can be found under "Summary". (The review appeared in the "Stratford Gazette" in late May, 2017.)

Nice save by Square (or at least, nice try). A great read that will leave you with a smile on your face at least if you don't end up laughing, that ends on an unexpected note (or perhaps not so unexpected, if you've read other Barnett & Klassen books).

Triangle has thought up a sneaky trick that he wants to play on Square. So he sets out through his triangle door, away from his triangle house, and triangle shaped world. When he reaches Square's house, he does a mean thing. The antagonized Square gives chase. Rather than ending with a happy resolution, the author leaves us with a thought-provoking question, and that awkward feeling where both parties end up worse off than before because of their actions. The lesson is two-fold; don't play mean tricks on friends, and seeking revenge often ends up in sorrow. Both Barnett's and illustrator Klassen's minimalist style delivers a pointed story. Images progress in a triangle like fashion, starting and ending at the same place, with the turning point being at Square's home. Clearly, every bit of the composition and space was carefully considered, because the pacing and emotional beats are perfectly timed, and, the thoughts of, and the relationship between, the two characters is always visually in front of us. Triangle is another thoughtfully brilliant work from the creative team behind Sam and Dave Dig a Hole.

Klassen and Barnett back at it again with sassy dark humor that kids love. This one will not disappoint!

I love the concept of the book and it is a great introduction to triangles and squares. The humor is perfect for elementary age. I did not like the binding and the ending. The binding will not hold up to active kid use and the ending is abrupt. The ending feels like it is missing something or is unfinished.

Triangle by Mac Barnett, 48 pages.
@ SPL: JP Barne
It’s evident that Triangle is up to no good! His shifty eyes give him away as he delights in planning a sneaky trick for his friend, Square.
Making the long trek to Square’s house, Triangle hides himself at the side of the doorway. At precisely the right moment, he plays his trick.
Alas, Square appreciates neither the perfection nor the originality of the prank! He chases his three-sided friend all the way back to his triangle-shaped house and rewards him with a trick of his own.
One wonders who actually has the last laugh in this hilarious, seemingly-simple, clever story. Perhaps it’s the author, because the question that ends this tale isn’t what readers are likely expecting.
The minimalist watercolour-and-graphite illustrations, the simple sentences and the repetition all contribute to an unusual picture book that will engage and entertain young listeners and readers.
Triangle is the first in a planned trilogy by author Mac Barnett and artist Jon Klassen, who have previously collaborated on two Caldecott Honor Books, Sam and Dave Dig a Hole (2014) and Extra Yarn (2012).
** Recommended for ages 4 to 7 years.
** Reviewed by Sally Hengeveld, librarian, Stratford Public Library (Ontario).