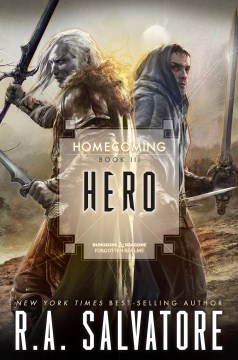 The demon hordes have receded from the Underdark, and now the matron mothers argue over the fate of Drizzt Do'Urden. Even so, it becomes clear to one matriarch after another that while the renegade drow may come and go Menzoberranzan, the City of Spiders will crawl forever on. And so Drizzt is free to return to his home on the surface once again. Scores are settled as lives are cut short, yet other lives move on. For the lone drow there is only a single final quest: a search for peace, for family, for home-- for the future
Publisher: [Place of publication not identified] : Wizards of the Coast Publishing, 2016
ISBN: 9780786966059
Branch Call Number: EBOOK CLOUDLIBRARY
Characteristics: 1 online resource text file
Additional Contributors: 3M Cloud Library
cloudLibrary

*Note: the summary up top is most likely for the previous volume in this series, not 'Hero.'

While I have enjoyed the 'Legend of Drizzt' series since I was a teenager, I worried, going into this volume, that even RA Salvatore would fall into the trope of role inversion between the 'hero' and 'villain.' I needn't have worried.

'Hero' explores realities, what it means to be a hero (and inversely a villain), and going beyond old understandings and limitations. It does so through compelling storytelling and character development -- something Salvatore has masterfully developed over 30 or so years with the prototypical rogue dark elf and his friends.

While reading all of the novels in this series will greatly heighten your enjoyment of it, doing so is probably not necessary just to enjoy a good read. You could probably take the series from the 'The Companions' and be just fine, although you will lack some of the details about some of the characters, especially those who died before then.

Further, I do believe that 'Hero' is a compelling and extremely satisfying conclusion -- to this particular trilogy, certainly, but if Salvatore decided to retire the series, then it would serve well as a fitting series finale.

Highly recommended -- and if you can, why not go from the beginning, with 'Homeland?'

BNuts001 thinks this title is suitable for 13 years and over

Drizzt Do'urdden, Artemis Entreri, and Jarlaxle return to Gauntlegrym, having successfully rescued Entreri's love, Dahlia, from Matron Mother Baenre's clutches -- but Drizzt is not unchanged. Mind warped by an Abyssal madness and Yvonnel Baenre's curse, he believes the reality where his friends have been reborn to be a lie. It is now up to an eclectic collection of allies and former-enemies to cure Drizzt.

Gauntlegrym is not completely clear of danger either, as the Primordial Fire Elemental that powers its Great Forge is set to explode again in decades' time. Led by Cattie-brie Battlehammer herself, a team of Faerun's greatest mages assemble to rebuilt the broken Hostower of the Arcane in Luskan to properly harness the Primordial's power before it can erupt.

Menzoberanzen also moves in the aftermath of Llolth's plot to release the denizens of the Abyss into the Underdark. While great demons lurk, the Great Houses of the drow city seek security and power. And in the wake of her father's actions, the reborn Yvonnel considers the meaning of true power and knowledge, especially as it relates to Gromph, Jarlaxle, and the renegade-turned-ranger, Drizzt -- and finds herself questioning her apparent place as Llolth's chosen, destined to become Matron Mother of Menzoberanzen once again.