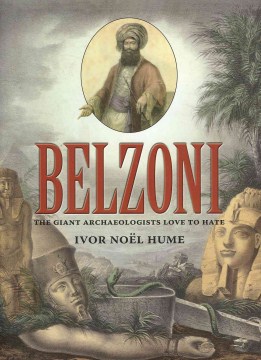 The Giant Archaeologists Love to Hate

The Italian son of a barber. A failed hydraulic engineer. A giant who performed feats of strength and agility in the circus. Giovanni Belzoni (1778–1824) was all of these before going on to become one of the most controversial figures in the history of Egyptian archaeology. A man of exceptional size with an ego of comparable proportions, he procured for the British Museum some of its largest and still awe-inspiring treasures. Today, however, the typical museum visitor knows nothing of Belzoni, and many modern archaeologists dismiss him as an ignorant vandal.

In this captivating new biography, Ivor Noël Hume re-creates an early nineteenth century in which there was no established archaeological profession, only enormous opportunity. Belzoni landed in Egypt, where he was unsuccessful in selling a hydraulic machine of his own invention, and came under the patronage of diplomat Henry Salt, who convinced him to travel to Thebes in search of artifacts. Among the many treasures Belzoni would bring back was the seven-ton stone head of Ramesses II, the "Young Memnon."

The book includes gripping accounts of Belzoni’s wildly productive, and physically brutal, expeditions, as well as an unforgettable portrait of his wife, Sarah, who suffered the hardships of the Egyptian deserts and later bore the brunt of the disillusionment that came with the declining popular perception of her husband. Including numerous illustrations, many in color, this volume brings one of archaeology’s most fascinating figures vividly to life.

Book News
"Here is a story of naiveté, ambition, duplicity, avarice, and poverty...." So states Noël (former director, Colonial Williamsburg's archaeological research program) in his prologue. Belzoni (1778-1824) was, indeed, physically a giant; he also was a giant in terms of his impact on the Egyptian collections at the British Museum. This study explores his life and work as an artifact hunter, the context of his activities, and his fall from grace. The volume is attractively designed and includes numerous plates. Annotation ©2011 Book News, Inc., Portland, OR (booknews.com)