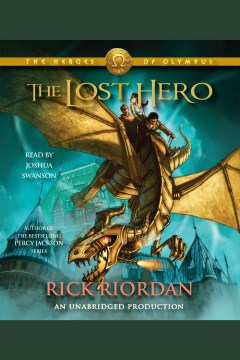 SPOILER FREE-The start of Riordans sequel to Percy Jackson is....alright. I mean I loved every Percy Jackson book before this and this one was just fine. The Lost Hero is all around fine with some good parts in it. I love Heroes of Olympus more than Percy Jackson, but it didn't get off to the best start. I was wasn't bad nor was it great, it was fine and at times good. The action is still great, but the plot and characters are not as amazing as the last series. I liked it, but didn't love it.

I am listening to this book, and I haven't read the Percy Jackson series. It hasn't been a problem to read this without reading the other series first.

It is a great, adventurous book. The young heroes are on a quest to free Hera. The friends each bring special strengths to the table, but their friendship will be tested by secrets that they keep. I can't wait to keep listening to what will happen next.

A great continuation of the Percy Jackson series. I wasn't sure about this one at first, since it focuses on introducing new characters, and Percy himself doesn't appear in this series until book 2. But once I got to know the new characters, I grew to like them almost as much as I like Percy, and once all of the set up is complete, the story really starts to move along and becomes much more engaging. A great start to another great series by Rick Riordan.

The story set-up isn't terribly smooth, and this is a denser read than the first few Percy Jackson books, but once the action heats up, that's easily forgotten

from what I can tell this is basically the series after the original "Percy Jackson" series which starts with the "lighting thief". "spoilers" Percy Jackson does not actually appear in this series till book two.

Percy Jackson and the Heroes of Olympus - BOOK 1

A good start to the series, and that is all anyone can ask for right?

I LOVE THIS SERIES! ITS AMAZING! You will never guess what will come next! Riordan brings you with Percy and the others, you feel like you are right there all of the time; when Percy meets Leo, when they arrive at camp half blood, when Percy defeats Kronos in the last series, You take Harry Potter, I’ll take Percy Jackson. :D

Anybody who likes greek and roman stuff, press the heart below!❤️❤️❤️

Timgiaco thinks this title is suitable for 10 years and over

imshick thinks this title is suitable for 9 years and over

red_dog_15145 thinks this title is suitable for All Ages

black_penguin_521 thinks this title is suitable for 10 years and over

RobertELPL thinks this title is suitable for 14 years and over

One line into the book and it already had me laughing:
"Even before he got electrocuted, Jason was having a rotten day."

“Piper gripped his hand and followed him, “If I fall, you’re catching me.” “Uh, sure.” Jason hoped he wasn’t blushing.
Leo stepped out next. “You’re catching me, too, Superman. But I ain’t holding your hand.”

ALL RIGHT CUPCAKES! You're About To See The Grand Canyon! Try not to break it

-You want us to ride off to save the world on Happy the Dragon?

Next is probably my favorite:
First things first, Leo told himself. Survive today. Work out crayon drawing of destiny later.

Coach Hedge did the obvious thing. He raised his club and shouted, 'Die!'

Now the quotes I like, although that last one I am sure Elsa would have liked.
'Leo,' Jason said, 'you're weird.'
'Yeah, you tell me that a lot.' Leo ginned. 'But if you can't remember me, that means I can reuse all my old jokes. Come on!'

Well I told myself I would open the book and find a quote from that page and post it on here. So here it is:
'She's the goddess of snow,' Jason said. 'What's she going to do, throw snowballs at us?' But as he said it, Jason had a feeling Khione could do a lot worse.
page 225

Whatever Hera had done to shoot them across the country, it wasn't good for piper's stomach. She could barely control her nausea. Leo wasn't so lucky. He jumped of the table, ran to the nearest bronze brazier and threw up in it - which was probably not a great bunt offering for the gods.

"Lady, I got a three-pound hammer with your name on it."

The Lost Hero:
When Jason Grace wakes up on a school bus for "bad kids" with no memory of where he came from, things immediately start to go downhill. The only person who seems to notice that something is wrong is the P.E. coach. And Jason has a Girlfriend? And a crazy best friend who won't stop messing around? Jason almost believes that he must have forgotten about his messed up life when the school group is attacked by... storm spirits? Join Jason, Piper, and Leo on their exciting journey to save the queen of Olympus from the giant king. It's back to Camp Half-Blood we go, and ready for an action-packed new quest! But the adventure has only just started.
Don't miss the next 4 book in The Heros of Olympus series!

7 half-bloods shall answer the call, to storm or fire the world must fall, an oath to be kept with a final breath, and foes bear arms to the doors of death.
You'd expect that after the last great prophecy it would take years for this one to come to pass. But of course Percy's luck isn't that good. I'm Jason and I just woke up in a bus driving to a museum in the middle of nowhere. Next thing I know my coach reveals himself to be a goat, a bunch of living clouds try to kill us and I can fly. Now I'm on my way to save a goddess from an army of monster with two people I've never met before in my life. This should be fun!

Jason wakes up in a bus not remembering who he is

Jason wakes on a bus with no memory of anything (This is starting to sound like the maze runner) so rounded by friends who are convinced they know him and after a while things start falling into place.

Jason, piper and Leo find themselves at camp half blood. they then go on a quest to save Hera, who is imprisoned by gaea, mother earth

Jason has a problem. He doesn't remember anything before waking up on a school bus holding hands with a girl. Apparently she's his girlfriend Piper, his best friend is a kid named Leo, and they're all students in the Wilderness School, a boarding school for "bad kids." What he did to end up here, Jason has no idea-except that everything seems very wrong.

Piper has a secret. Her father has been missing for three days, and her vivid nightmares reveal that he's in terrible danger. Now her boyfriend doesn't recognize her, and when a freak storm and strange creatures attack during a school field trip, she, Jason, and Leo are whisked away to someplace called Camp Half-Blood. What is going on?

Leo has a way with tools. His new cabin at Camp Half-Blood is filled with them. Seriously, the place beats Wilderness School hands down, with its weapons training, monsters, and fine-looking girls. What's troubling is the curse everyone keeps talking about, and that a camper's gone missing. Weirdest of all, his bunkmates insist they are all-including Leo-related to a god.

In this first installment of The Heroes of Olympus series, we are introduced to new characters, continuous adventure, and pour old heroes. With deadly fights, mind-blowing adventures, and everybody's least favorite thing-- cliffhangers-- that Rick kills us with. The Son of Neptune must be read the day after finishing this one!

At the beginning Jason did not know who he was but because of all his adventures he was able to regain his memory.Jason helped to save Olympus and he is the son of one of the big 3 just like Percy Jackson.This book is a lot longer than Percy Jackson and very adventurous.

This book is about 3 kids, Jason, piper, and Leo who go on a long adventure to save the goddess Hera, who has taken away a lot of Jason's memory, and piper, has a problem of her own. Her least favorite giant has captured her dad, a famous movie star, and he is ready to be eaten. The only way piper can let her dad go is to betray her two friends. Leo, has his own way of tools. he always knows how to fix things.so these three set off on their trip with their dragon, Festus the dragon, which Leo has fixed.

Other: WARNING ⚠️ this book has extreme addiction and you will not be able to put the book down. Cause: Awesomeness

Other: WARING: extreme craving for the next book

Other: best book ever

Other: It may be too awesome for some readers.

Violence: it has some pretty intense fighting scenes:D

Other: Extreme happyness may result from reading this book.

Violence: Just some fighting action not too intense

Frightening or Intense Scenes: Some intense action and ya they get coverd in monster slime alot :P

Coarse Language: It mentions that he swears in ancient greek but that is like it