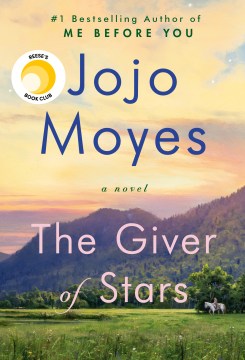 The Giver of Stars

I enjoyed this book BUT. (1) poorly edited. Eucalyptus trees in northern Kentucky? don't think so.... (2) much more seriously, there are some strong indications that this book was heavily plagiarized from another author, less well known and using a publishing company that is related to Pamela Dorman Books - Viking. Look it up on the internet. I am very disappointed in this author. Kinda wondered how a woman from suburban London knew so much about Kentucky history. well.............
READER BEWARE!!!

One of my favorite books so far this year. Very immersive and a wonderful story.

An enjoyable read. I didn't know anything about the Packhorse Library - what a fantastic endeavour. Great characters, interesting plot. A bit slow at times, but overall a good read. Definitely recommend to anyone looking for a quick and easy read.

Held my interest with subject of WPA packhorse library, plot and characters and with some humor and poignant moments, but not impressively written.

This is my first JoJo Moyes novel. I had looked at other titles, but thought them to be more of the romance genre. This book grabbed my attention because I had not known about Eleanor Roosevelt's new traveling library program or the Horseback Librarians of Kentucky. It is a little difficult to believe that Alice is quite as naïve as she is portrayed, but I grew to love the characters and the bravery of the women to be different in a very judgmental and insular community. I recommend the book. Kristi & Abby Tabby

I was a big fan of the Me Before You series she wrote and I enjoyed going to see her speak so I gave this one a try. The subject of the book was enough to hook me right from the start. It is a story about a group of horseback librarians in rural Kentucky during the end of the Great Depression. The main character, Alice, is a British expat who married a man from Kentucky. Her experiences as a horseback librarian and friendships with the women she works with help transform her life. Strong women, the power of friendship, love of books, and happy endings are some of the main themes covered. It is a feel-good story I recommend!

Enjoyed this book immensely! The description of the small town life of Baileyville, Kentucky and the surrounding hills which the packhorse librarians traversed was well done. I felt at times I could 'see' the terrain in her writing. The storyline of the unexpected bond of women was a refreshing change, and carried my interest through to the end.

This was a fantastic story! Well written. Centered around brave women pioneering a Packhorse Library in the mountains of Kentucky. Old and new fans of Jojo Moyes will approve.

This is a fictional work about Eleanor Roosevelt's program for traveling libraries in small-town Kentucky in the late 1930's. A team of women (the Packhorse Librarians) use horses and mules to carry books to isolated mountain dwellers, hoping to bring reading, knowledge and literature to a wider audience. It is a fascinating study of the changing roles of women at that time, in that location, and reflecting on how much or little things have changed. As a crafty person, I appreciated how they re-cycled a lot of the items that were too worn to be lent out, by gathering similar articles etc. together into newly bound "scrapbooks" of recipes, cooking tips, farming advice, child-rearing, beginning readers, that could again be circulated. Well worth the read.

A story about an English girl who marries a Kentucky man, Bennett. Alice's family seems to think she is quirky and so does her new married family. However she finds her groove in delivering books to isolated families in the Kentucky mountains and develops close friendships. Margery one friend is very strong spirited and runs into trouble. Margery's library friends stand by her a!nd the story develops... Captivating, fun read based on true library history!

Good read about women in Kentucky who bring books to the rural population in a time when women were supposed to be obediant and well behaved. Interesting and engaging characters. A bit unbelievable at the end (but I would have hated a more truthful ending). Fun and uplifting based lightly on historical fact.

Get in line for this book! You'll laugh, you'll cry and you just might relate to a character or two!

4 1/2-5 star read. JoJo Moyes writes great novels and this is one of her best. It's a departure from her previous books but was a really interesting book. Alice is an English girl who married a wealthy American in a whirlwind romance. Taken to rural Kentucky where her father-in-law owns a mine, she is lost and despairing as her husband rejects her and her father-in-law makes her life unbearable. She decides to join the women of the packhorse library and finds some meaning in her life. When something terrible happens, she leaves her home and husband and moves in with a friend from the library. Her father-in-law becomes vengeful. The book is not only informative about a piece of history but also what it was like for women in rural areas like the mountains of Kentucky and how brutal their life was. But it introduces us to some really wonderful women who I enjoyed getting to know as I read this book. Another wonderful Moyes book.

Five stars all the way! I absolutely loved this book and all the characters!! So good, I didn't want it to end.

Absolutely delightful. I chose this book from a list of suggested book club titles. I highly recommend the audiobook version, as the narrator does a fantastic job with the pacing and voices. The characters and plot reminded me of books like Fried Green Tomatoes, The Color Purple, How to Make an American Quilt, or even Steel Magnolias. Recommended for fans of historical fiction, strong female characters, and anybody who loves their library!

After the first three books I read by Jojo Moyes, 'Me Before You', 'After You', 'Still Me', I wasn't convinced I'd read another, not because of her writing but more because I felt, and still feel, she was rather cheer leading a concept I find utterly loathsome.

I gave her another try with 'The Horse Dancer', and, as with 'The Giver of Stars', I am so glad I did.

'The Giver of Stars', based on "The WPA's Packhouse Librarians of Kentucky", is gritty and honest in emotion. The women find their strength in the support they receive from each other and from the gratefulness of the simple gift of books to folks whose only goal is trying to survive.

Those brave ladies, unbeknownst to themselves, were true early "feminists", forging their way, helping folks that others wouldn't, moving and acting quietly but determinedly to achieve their goals in the face of dire conditions, the condemnation of the controlling men and norms in their small part of the world. I find it a quite a pronounced and sad counterpoint to the self-proclaimed feminists of today who seem to only stand up for other women whose ideological stance mirrors their own, who scorn those whose doesn't, whose sole objective has become promoting a single cause, often loudly and vulgarly, with which most disagree.

I expected some of the outcomes of 'The Giver of Stars' but was surprised by how they came about. There are parts that will bring you to tears and others you will cheer loudly.

'The Giver of Stars' is a wonderful book. Savor every moment of it, even the horrible reality of those people in that time. You will not be disappointed. And, how could you not be excited about the love of books and libraries?

I loved this book SO much! A second book about the pack horse librarians! And every bit as good. I loved Alice, the young woman from England, but I loved Margery even more. I stayed up way too late reading this marvelous story.

Before reading this book, I was not familiar with the Kentucky packhorse librarians. I enjoyed learning more about this part of history, as well as the friendships that formed between the librarians despite their quite different backgrounds. Since the book's publication, there have been accusations that it bears too many similarities to "The Book Woman of Troublesome Creek" by Kim Michele Richardson, though the publisher stands by the work. Readers are encouraged to read both novels.

"You know what the worst thing about a man hitting you?" "Ain't the hurt. It's in that instant you realize the truth of what it is to be a woman. That it don't matter how smart you are, how much better at arguing, how much better than them period. It's when you can realize they can always shut you up with a fist. Just like that." Ninety years later this is still a reality for many women.
Giver is of Stars is eerily reminiscent of gun culture in the USA today, the dependence and the power.
Gratitude to the Roosevelts who pushed library programs to educate and enlighten.

'Giver of Stars' is very well-written in terms of characterization of the six librarian pioneers who tended to to the literary (and often otherwise) needs of the rural folk. There's great instances of female friendship, and two beautiful love stories included to warm the heart. The ending proved satisfying for all characters involved (save for the villain), which is always a nice perk.

The story and characters were interesting but I felt the ending was contrived and not up to the quality of the rest of the book.

A book about depression era America did not appeal to me but when I saw it was by my favorite author Jo Jo Moyes I decided to give it a try. I really liked it as the women in it were very strong and stood up for themselves.Yet, the reality of the era was that men hit women, making the powerful Margery say, "You know what the worst thing about a man hitting you?" "Ain't the hurt. It's in that instant you realize the truth of what it is to be a woman. That it don't matter how smart you are, how much better at arguing, how much better than them period. It's when you can realize they can always shut you up with a fist. Just like that." That is what Alice had to realize too but the book proceeds with a library giving women a raison d'etre and the ending justified my reading the 387 pages.