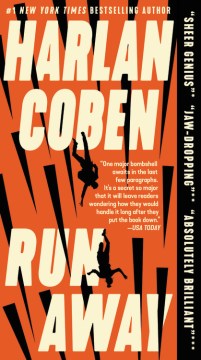 I am a big fan of Harlan Coben novels. Loved this read.

quick and easy read that was well paced - he's back on his game in this one even if it was somewhat predictable...

Sorry.....usually like this author but slogged thru 222 pages and finally closed the book.
Just didn't seem to care about the characters and story.

Harlan Coben's latest novel is a typical example of his stand alone work. First, a plot line with so many twists and turns that you'll actually smile at the subterfuge. Second, a cast of likable characters that try to figure out what is happening and why. And third, just when you think it's over, the epilogue adds another twist. Corben's natural tendency to make toward smart and pithy dialogue is also in evidence. His trademark ability to move the plot at a page turning pace makes this a good, if not deep read. Fans of his Myron Bolitar series will note an obscure reference to that body of work, too.

I really enjoyed this book. It was a quick and easy read.

not my favourite by this author, but enjoyable. Offers a peek at how circumstances can pull an ordinary person from an ordinary family into extraordinary and frightening situations. Very twisty.

It dragged abit but the last few chapters riveting!!!!!!

As a Harlan Coben fan, I found this book to be convoluted (?) and often found myself thinking where is the essence of the plot going? Secrets abound and the main characters become buried in senseless violence to what real end, I thought. This is one Coben book that I would not recommend - the first one that I nixed.

As one of my favorite authors, I enjoyed reading Run Away. It held my interest throughout. He does an excellent job of bringing his characters to life. His writing style keeps the reader glued.

The reason I didn't give it 5 stars was the disappointing ending; it presented as though Corben wasn't quite how to end the story.

Well done Mr. Coben. You're back in the saddle again!!!
Fast quick and insightful. I have a feeling that you might
have a clue as to how to get America out of this drug
haze!!!

I think this was his best book yet! Loved the ending!

I was totally disappointed in this book. The story line sounded good to me until I began reading and it became so ridiculous and totally without morals. What a waste of time to read this book. I have always enjoyed Mr. Cohen's novels but this onw ,in my opinion was terrible!

I dont care what any1 says about this book, I LOVED it. I wont go off on a soapbox about what happens when parents DONT care. I enjoyed Cornelius as well as Simon and Ingrid. A great read and 5 stars! Happy Reading!

As a great fan of Harlen Coben's, I am disappointed in 'Run Away'.

The story did not know where it wanted to go, so instead it plods along with unexpected, yet unresolved twists and turns. Is it a story about a father searching for his addicted daughter? Ostensibly, yes.
Is it about the secrets of the mother?
Ostensibly, yes.
Is it about drug addiction and adoption and adoptive parents and genetics and cults and horrible, awful people and sexual abuse and people being killed seemingly at random?
Yes, all of the above, which made the story far too far-fetched with no likeable characters, except maybe Cornelius.

But again, for me, too much is left unresolved. We don't know what happens to many of the peripheral characters who were given much ink or why their awful narrative was included.

I was also put off by the ugly rants against mainstream religions, especially Christianity, and the scorn against those who show their love for America:

"The profile avatars of his 'supporters' had either eagles or American flags on them. 'Terrific," Simon said. "The psychos are on my side."

I do understand the purpose of the Christianity bashing was to explain the why of a particular characters beliefs in her 'religion', but that did not make it any more palatable. I can find no reason to bash those who love our country and proudly show it with her symbols. None.

The most compelling narrative that struck me, was not what compelled other reviewers, 'What would I do for my child?', but rather the fathers soul searching and agonizing as to what HE did that put his child in the predicament she's in. What little, unremarkable instance caused the course of her life to change so dramatically?

'Run Away' will keep you reading on, but I have never found Harlen Coben to be so obtuse, so wandering in any of his other 32 books that I've read.

Only 2 stars because 'Run Away' had great potential but was not tightly written and is less riveting because of it.

I also found it had a slow start but keep reading, don't give up, it is a great story.

Harlan Coben delivers again in RUN AWAY. I am not doing any spoilers here though. This is the usual creative, convoluted, riveting type of story he always does. I enjoy authors who develop a good character (or in some cases, characterS) over many books. Coben's books though are all originals. That takes an amazing talent to do over and over again, and he has it. Great read. That said, I have to say that after 25 pages I was ready to return the book and move on. It just didn't grab me. Then I decided to try another 25, and while the story began to crystallize, I was still on the fence. By page 75, I was totally hooked and blew through the rest of the book. So if starts a little slow and uncomfortable for you, don't give up. After all, it's Harlan Coben.

As always, Coban writes a book hard to put down until it is finished. His books makes you think about life. I am looking forward to the next book that comes out.

Really enjoyed this story. Lots of twists and turns within this family story. Quick read,

I found this to be Harlan Coben's best effort to date. I thoroughly enjoyed it - and there was a lot to follow and keep up with, so no time to let your mind wander! The ending was classic Coben, and one that I did not anticipate, so very well done, sir!

The book has an interesting start but the middle is slow and then picks up towards the last third. For me, Coben has included too many asides which slowed down the action. Those paragraphs, and sometimes pages, where easily glossed over. He also provides some foreshadowing as the story unfolds which prepared me somewhat for the conclusion of the story. I didn't enjoy this book as much as the others Coben has written.