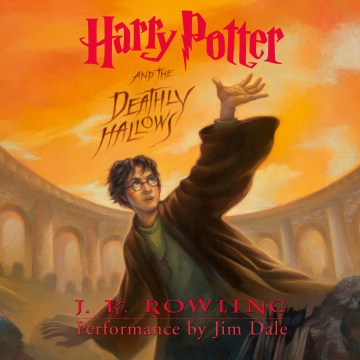 Harry Potter and the Deathly Hallows

Some content below may have been reported by users for containing spoilers or offensive content. Learn More

This is a very fulfilling end to the Harry Potter series. It really demonstrates how there is no peace and tranquility without chaos and sacrifice. I just finished rereading this series during quarantine and is incredible how many great aspects of these books slipped my mind since I first read them. I cried the first time I read this book and I cried this time. There is are some incredibly fulfilling bits of character development in this book and it has its fair share of twists. And one of the coolest aspects of this book to me is that we get to see characters that we normally wouldn't focus on in a new light.

If there had to be a knock on this book, it's that things really get tough in the book at times. This book is not all rainbows and unicorns. There were certain points in the book where I took a short break away from the book because it was difficult to get through. In the end, my love for Harry Potter got me through those bits and it was well worth it. I cannot think of a better ending for these books so I highly suggest you check it out if you liked the past books. - Martin, Grade 12

Deathly Hallows has a great story line. I think that the story dragged on a little, and every now and then I had to power read. This book might need concentration, because it does get chaotic at certain points. It takes you down a rollercoaster of emotions. You'll feel ecstatic, happy, but you will also feel sorrowful at certain points.The ending leaves you feeling good, but also a little sad. It is a wonderful conclusion to the Harry Potter series.

I really liked how this series ended but I am sooo sad that so many characters have died in this series! J.K. Rowling is so goood at writing books!

I don't have words for it. It was just so good!

This book was an amazing end to the series. I loved it so much, and it was worth staying up all those nights and spending countless hours reading the book. If you haven’t read the series, I really recommend reading the Philosopher’s Stone, and continue your journey to this incredible book. The entire series was filled with excitement, anger, action, magic, sadness, love, friendship, family, humor and so much more. This book can make you cry, as well as laugh and smile. J.K. Rowling did such a marvelous job creating each of the characters and their personalities; it makes it really easy to relate to them. This book taught me that you can always find some light and some hope, when you are stuck in the darkness. It also showed me how powerful love and friendship can be. I cannot even express how great this book was. If you love fantasy, I really recommend reading this series, and this magical ending.

A wonderful, magical end to the Harry Potter series. So much backstory is explained for the characters of Snape and Dumbledore. While the beginning is slow, once the story and mythology picks up, you won't be able to stop reading.

And this concludes the original Harry Potter series. There were ups and downs, joys and sorrows, and I loved rereading it all. From Hermione and Ron's bickering to Harry's relationship with Ginny, from Ron's success in getting on the Quidditch team to Hermione's realization that the Hallows were real, to Harry's ultimate decision that saves not only Hogwarts but the entire Wizarding World. This book ends a tale of friendship that so many people enjoyed reading about, and yet it is not the end but the middle of the story.

Rowling was truly inspired to write such a wonderful story and watching the characters grow and change was my favorite part. From an unsure boy who was abused by his uncle and aunt to the hero who rejected power to defeat his enemy, Harry Potter is a protagonist I love reading about. From the second-in-everything Ronald Weasley who stepped onto the Hogwarts Express to the man who realized that being the popular one is a matter of perspective. From the brainy girl with no friends to the woman who eventually became Minister of Magic and helped to protect the rights of non-Wizards. All of their stories are fantastic and sad at the same time.

If you have the time to follow a seven-book series, definitely pick up this amazing series. Be prepared to laugh, cry, and jump up and down with victory in each book. If you enjoy fantasy and magic with lots of friendship, pick up 'The Philosopher's Stone' and start the journey. Or, if you're an old hat at Hogwarts, reread this amazing series to sink back into the glorious world that J.K. Rowling has made.

Obviously, great. You don't need me to tell you that. The insight into Snape's past made a lot more sense and was more fleshed out than in the movies, and I definitely appreciated that (although, his character is still not redeemable, and if you disagree, you're honestly gross). I definitely cried in this one, and I was fascinated that by the time the first movie (Deathly Hallows, pt.1) ended, we were already 2/3 of the way through the book! Anyways, absolutely loved this; what a great end to a great series.

Could use some pansexuals

Yowza! Hot diggity dog. This was excellent! I totally get it now. I'm officially a Pott-head. I would say this was one of the best in the series.

This book was so amazing. It is worth staying up all night for every single pages! What a great book!

love all the books

Can't believe I waited so long to read this series.

In Harry Potter and the Deathly Hallows, I loved what I read. I thought that the description of the history of the wizard world was very realistic; also the suspense in the story was enjoyable and the story makes you want to read on and on... (That's why I read 2 hours last night).
-Colin, Age 12

This book tore me up inside. What a great ending. J.K. Rowling's imagination is beyond my wildest dreams. To get all these pieces lined up throughout the entire series and have everything fit together like a grand puzzle is fantastic. This is the culmination of years of emotions - just a brilliant ending. I still tear up a little at the end, because it was the end of an era. The fandom still goes strong but tears well up nonetheless.

For my second time through reading this I was able to stretch it out over 5 days instead of like the first time when I finished it in 36 hours. I only really have one gripe about JK's ending to her epic series. But we wont discuss that here.

This is my favorite of the series!

I love this series!

I have re-read this book like a bajillion times. It is my favorite book in the world. I wish that I could give it 6 out of 5 stars.